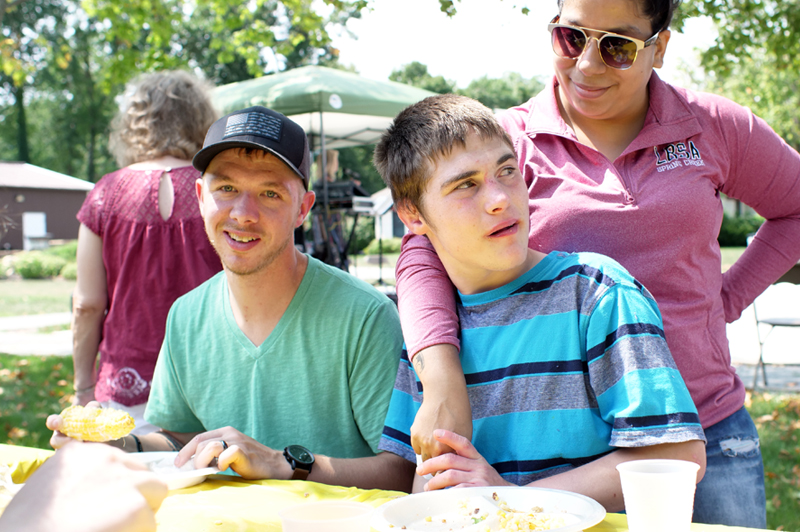 Thanks to two valued partners Charlie Sewich and Frank Grazzini we had the opportunity to host Senator Rich Draheim for a tour and visit of LBSA. Senator Draheim is our state senator, newly elected last fall.

Generally, working with legislators, especially new legislators, is an educational process. Senator Draheim is both knowledgeable and supportive of our work and our need for better compensation for our services and our dedicated staff members. He gets it. I am heartened by this.

Senator Draheim understands the depth of the labor issues we face at LBSA; he understands that we are at the bottom of the heap when it comes to compensation and being able to compete for the best and the brightest workers. He knows that we are unable to set our own prices because of state laws and regulations currently in place.

In short, our new senator is a realist, which means he tells it like he sees it. He doesn’t see employment prospects changing dramatically either in this state or across the nation. He thinks that federal support will continue to shrink. I don’t like that picture, and I can’t disagree with him.

I am grateful that our state senator has made a pledge to partner with us on the compensation issue, to write legislation and to work to find partners to support that legislation. He believes that we will need to continue to find ways to rein in our Medicaid expenditures, and he believes that services and supports for people with disabilities need to be preserved. Like us, he believes that our folks deserve and need to be at the top of the list.

The road ahead is uphill and filled with rocks that need to be pushed up the hill or out of the way. We are fortunate to have a partner on that road in Senator Draheim who can work by our side. And by “our side,” I mean we need every one of you to lend your voices to provide the dignity, care and supports that are the lifeline for those we serve. Talk to your legislators – support legislation that increases pay rates for people working to help those with disabilities. Give our legislators the information, the personal stories and the facts they need to fight a difficult battle with their colleagues in the House and the Senate. They can’t do it alone!

Thanks to Senator Draheim for his interest and his support and for his willingness to be a champion.

If every one of us says “I will …” as Senator Draheim has, as I have, we can push the rocks up the hill or off the road. Ignore the politics, and encourage meaningful legislation.

Specific legislation will be drafted in the weeks to come. Look for more from us on those efforts. Raise your voices, and be heard.

Thank you to each of you for listening and sharing.