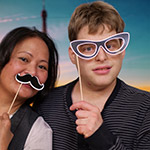 Dennis thrives on routine and predictability.

Over the last nine years, Dennis has developed new routines at his quiet cottage on Oak Street. His five housemates and support staff have become part of his family. Dennis’ parents, Brent and Tobi, are pleased with Dennis’ current living situation. “You can tell he’s happy, because he smiles and hums a lot”. As is often the case for someone with a developmental disability, finding the right place to live, with the appropriate level of support, can be challenging.

For Dennis, the journey began at age two when Brent and Tobi began to notice something wasn’t quite right. Dennis wasn’t saying any words, and began to display some unusual behavior: he would compulsively flip light switches on and off, run laps across the house and crash into walls, and repeatedly jump from very high places. One day when they picked him up from the childcare area at their health club, one of the childcare workers asked Tobi: “Have you considered having him evaluated?” Tobi says her initial reaction was, “Evaluated for what?!”. Soon after that, Brent and Tobi reached out to their pediatrician, who referred them to a variety of specialists, including medical professionals, their county developmental disabilities department, and the local school district. At age 3, Dennis was officially diagnosed with autism.

Dennis participated in early childhood special education until age 6, then attended a special ed program at his neighborhood elementary school. The school years were difficult, and Dennis’ behavior became increasingly challenging due to many factors, including the chaotic environment, lack of predictability, and inconsistent staff from one year to the next. Dennis stayed at his elementary school through age 13 in order to completely avoid the typical transition to middle school.

When it was time to look for a new school program, Brent and Tobi toured several programs inside and outside their district, but none appeared to be the right fit for Dennis. A school administrator suggested one more tour: Laura Baker School in Northfield. The small school and quiet environment seemed perfect, and the Laura Baker School staff were confident they could meet Dennis’ needs. Beginning at age 14, Dennis lived at home with his family and attended Laura Baker School. Dennis responded positively to his new program almost immediately. “He was out the door every morning like he couldn’t wait to get there!”, recalls Brent.

As the years passed, Brent and Tobi became more familiar with the Oak Street campus, and began to inquire about residential services. They didn’t feel quite ready to move Dennis out, but they were also “…starting to feel like we can’t do this forever….”. A few months later, when Dennis was 19, they were notified of an opening.

Brent and Tobi, together with LBSA staff, developed a unique transition plan with the goal of maximizing predictability for Dennis. Brent spent the first three nights on an air mattress in Dennis’ room to help establish evening, bedtime, and morning routines. Tobi would come after school to help solidify the afternoon routine. After three weeks, Brent and Tobi had faded out, and the transition was complete. They wondered if the staff would be able to handle Dennis, and expected them to call saying: “Guys, it’s not working out”. That call never came. Brent and Tobi laugh as they reflect on everything involved with Dennis’ transition. “They (LBSA staff) probably thought we were nuts. To this day, we all still talk about how remarkable and smooth the transition was”.

Brent and Tobi say that working together with LBSA staff has always felt like a team. They say much of the credit for Dennis’ success goes to Household Director, Zelene Castano, (aka “Super Woman”), (and Kathy Bromley. They have worked with Dennis for his entire time at LBSA.

Today Dennis enjoys attending his day program in Apple Valley five days a week. He especially loves the art programming there. He also enjoys spending time with Mom and Dad, who visit often. Dennis attends an adaptive karate class on Saturday mornings. He also loves hiking, biking, and eating out at familiar restaurants. “We can’t envision him anywhere else”, say Brent and Tobi. “He wakes up happy. He goes to bed happy. It’s a beautiful thing”.