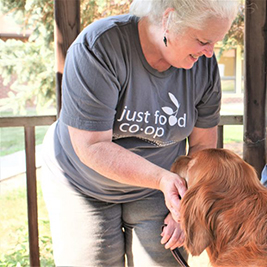 They say that for every ending there is a new beginning.

For Patricia Smith, retirement from 26 years of teaching spawned a new career of volunteerism. And a new “coworker.”

Prior to retiring in 2014, Patricia knew she wanted to spend her retirement volunteering to help others. About a year before leaving the classroom permanently, Patricia rescued Marco the “gentle giant” from a local rescue organization. As she got to know Marco she quickly realized that her new 2 ½ year old golden retriever had the perfect disposition for being a therapy dog. Shortly thereafter Patricia and Marco began visiting local nursing homes together.

Patricia and Marco’s connection to Laura Baker Services Association started when a local college student, who was an intern at the time, suggested that Patricia and Marco go for a walk with Britni, an LBSA client who was working on getting more exercise and more time outside. It was a perfect match.  Marco loved people and Britni loved animals. One walk turned into a weekly event.  Pretty soon, five years and roughly 200 walks had passed.  Patricia looks back at the experience with Britni with a level of fulfillment. “It was really satisfying to see her lose weight, walk faster, get fresh air and exercise and be a part of the community.” Patricia also developed a routine of spending time going for walks with Jim.  Patricia said that during their walks Patricia, Marco and Jim formed a special bond. “Jim used to have his own dog and so walks with Marco were very special to him.”

It wasn’t long after meeting Britni and Jim that Patricia and Marco were contacted about a variety of other opportunities to visit LBSA clients and households. Patricia says that although her volunteer experiences are always rewarding, she acknowledges at times they can be emotionally draining. She remembered one LBSA client who was in hospice. Patricia says although it was a sad scene, it was fulfilling knowing that, “even though he was at the end of his life, it was nice that Marco was there to help him through it. Marco would come and visit and would put his head on the edge of Ed’s bed to make it easy to be petted.”

Patricia describes her volunteer pet therapy experience at LBSA as a win, win, win scenario. She says it’s a win for the clients as Patricia has witnessed hundreds of times how, “Their faces light up when Marco enters the room.”  She says there is something relaxing about petting and connecting with a dog. Patricia says that being a pet therapy dog is a win for Marco, “He just loves the attention.” She laughs adding, “If you stop petting him, he will nudge your hand to keep going.” Patricia adds that being a pet therapy volunteer at LBSA has been a big win for her too as she has had the opportunity to meet so many new people. “The clients are so special and such sweet people. They are each very giving in their own way.”

Patricia, her husband, Bob, and Marco have recently sold their home in Northfield and moved to northern Minnesota, so volunteering at LBSA is no longer possible. At a recent family gathering at their new home, Patricia said her husband, Bob, told guests, “Marco used to be a therapy dog.” According to Patricia, Marco understands the word “therapy” and proceeded to go from guest to guest around the circle allowing everyone to pet him.

Every ending has a new beginning.

Interested in being a Pet Therapy volunteer? Learn more today.