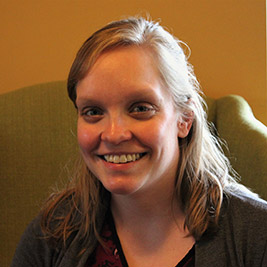 Music has always been an integral part of life at Laura Baker Services Association (LBSA). Performances for family, friends and community members, which featured singing and dancing by LBSA residents, began in the early 1900s. Since that time, music has been part of the curriculum. Hundreds of students and residents have participated in a variety of LBSA bands, choirs and other musical performances over the years. In recent decades, LBSA has employed a certified music therapist as part of its service team. Jenny Solar is LBSA’s current music therapist.

During an internship at a Children’s Hospital, Jenny says she was especially drawn to working with kids with developmental disabilities. After graduating from the University of Minnesota, Jenny worked for over a year with adults with developmental disabilities at an organization in Indiana. During that time, she was looking for an opportunity to move back to Minnesota. She heard about LBSA and was hired in October of 2016.

Jenny appreciates the fact that music is so multi-faceted because almost everyone can relate to it in some way. “You can listen to music, participate by singing or you can even play an instrument.” Jenny explains that music therapy can be helpful for individuals in a variety of ways. Last year, she attended neurological music therapy training and learned a variety of new concepts that she uses in her daily work. Some of the work has had amazing results that you might not associate readily with music therapy. “One client I have worked with has made significant progress with his fine motor skills development. This has helped him gain more independence, for example, in feeding himself more effectively. I have also implemented other practices, like the use of a metronome during sessions, which can provide the sensory regulation a brain needs and allow clients to work on other skill areas during our time together.”

During these last two challenging years, Jenny has ensured that the music has continued. Early in the pandemic, Jenny began offering music therapy sessions virtually and created themed video sing-a-longs for clients. In the summer of 2021, Jenny conducted music sessions outdoors, allowing her to maintain safety protocols. In October 2021, she restarted the LBSA Choir over Zoom, which she says has been a fun alternative for her choir members. There were technology challenges at first and she acknowledges that nothing can replace being together in person.

Learning how to implement music therapy virtually has had some added benefits. “Using Zoom and other technology has been a good learning experience, providing flexibility to continue music sessions in bad weather. Early in the pandemic, one client went home to Duluth to stay with parents for a while, and we were able to continue his music sessions remotely so he could have continuity with music in his life.” Jenny even used some technology that she learned about from one of her music therapy clients to create a music video for LBSA’s December Gala. The video featured 32 music clients and was a performance of Let’s Take a Step, an original song written by LBSA music clients and Jenny.

Like many services for individuals with intellectual and developmental disabilities, LBSA’s music therapy program has a significant waiting list. Thus, LBSA is in the midst of expanding its Creative Arts programming and will be hiring a second full-time music therapist, as well as a full-time art therapist. When asked about her goals for the next two to three years, Jenny chuckled, “Well … I’m not planning on leaving. But I am looking forward to being able to serve more people. It’s not always about the music – it’s about the relationships. I really enjoy getting to work with such a wide variety of people.”

Jenny and her husband, Scott, have a two-year-old daughter, Paige, and are expecting a son in July. Jenny plans to return after a three-month leave.

No doubt, the music will continue.