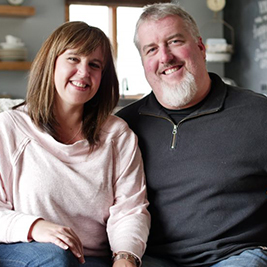 Mike and Kenna Schulz have made Laura Baker Services Association their “thing.”

Like most people who grew up in Northfield, Mike Schulz had heard of Laura Baker Services Association. It was his family business, Schulz Electric Inc., which Mike now runs, that led him to his first encounter with LBSA.

In the early 2000s, Schulz Electric Inc. was contracted to perform some electrical work at Wright Cottage on the Oak Street campus. As the campus remodeling continued over the years, Mike became increasingly involved. He went on to do the electrical design, and the Schulz Electric team worked on the remaining cottages.

Kenna has volunteered as the chair of the LBSA Gala auction committee for five years. The committee is responsible for securing auction items and helping with the overall coordination of the annual December event. Over the years that Kenna has been involved, it is estimated that over $120,000 has been raised at the Gala through the silent and live auctions! “I am always overwhelmed by how much people give at the Gala,” Kenna shares. “I’m usually in tears, and I get goosebumps.”

The Schulz family’s involvement doesn’t stop there. Mike and Kenna have begun to find ways to involve their kids in supporting LBSA. Just this year, their daughter’s confirmation group got into the spirit of volunteering, helping to set up the silent auction and dinner areas for the Gala.

Mike and Kenna believe that LBSA is a benefit to the community and enjoy supporting a local organization. “It’s fun to see the clients around town,” Mike says. “Laura Baker helps their clients succeed in the community.” He also explains that his employees enjoy working on the LBSA campus. “Our guys know the names of many of the clients,” Mike said. “They enjoy seeing them, and I think that’s important.”

It’s hard to calculate the full impact of Mike and Kenna’s involvement with LBSA over the years. In addition to the countless hours they have volunteered, the two have introduced many friends to the organization. Schulz Electric has also been a sponsor at numerous LBSA Golf Tournaments and Galas.

With ambassadors like Mike and Kenna, there is no doubt that LBSA will continue to be able to deliver on its mission in the upcoming decades!