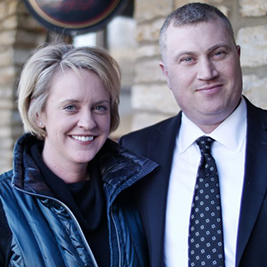 Some say that Laura Baker Services Association is an important part of the community because the organization brings people together.

In the case of Matt and Jessica Sewich, that is literally the case. One of their first dates was at LBSA’s annual December Gala. “I was in awe of how the community pulled together,” Jessica explains. “It was really an impressive event.” Fast forward ten years, and you could say that LBSA has transformed into one of Matt and Jessica’s hobbies.

For Matt, involvement at LBSA is a family tradition. His parents, Charlie and Lorraine, have supported LBSA in many ways over the years. Charlie is a former board member and capital campaign chair, and the Sewich’s business, Heartman Insurance, has been a regular sponsor at LBSA fundraising events.

It didn’t take long for Matt to follow in his parents’ footsteps. He has volunteered on the LBSA Golf Tournament committee for over 15 years and says he’s inspired to support LBSA for many reasons, including the opportunity to honor two of his family members. “I do it for the legacy of my dad,” Matt says. “I also had an uncle with Down Syndrome who passed away in November.” In addition, Matt says it’s important to him to support a local organization.

Jessica has been volunteering on the LBSA Gala auction committee for four years and has helped to secure numerous auction items that have raised thousands of dollars for LBSA. She explains that one of her favorite aspects of volunteering on the Gala committee is the camaraderie she feels. “I enjoy feeling like I’m contributing, and I have a great time doing it.”

Matt and Jessica believe that LBSA benefits the community in a number of ways, most importantly by providing a positive, safe environment for clients. An added benefit is the fact that the various LBSA events develop a sense of community by bringing people together for a common cause.

Something powerful happens when people are united for a shared purpose. Matt and Jessica are an important part of what makes the LBSA community special.