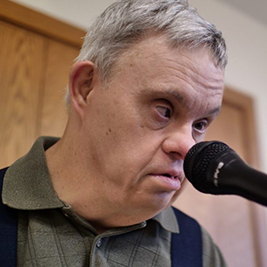 Mark is full of surprises.

Laura Baker Services Association Executive Director Sandi Gerdes knew Mark from early in her career at LBSA and recalls seeing Mark on stage years later. “I knew from working with Mark how difficult it could be for him to speak, so when I saw him singing a solo on stage I had tears running down my face,” says Sandi.

“No one would have imagined in a thousand years that Mark would love to go up on stage and perform,” says Grace Neuroth-Casson, who has known Mark for over 12 years. “They say music activates a whole different part of the brain.”

Music is clearly important to Mark, and LBSA’s music therapy program allows him an opportunity for self-expression and provides a social outlet. Mark participates in the LBSA choir and never misses a weekly practice or performance. He loves 50s music and did a solo of Elvis’ Blue Christmas at the gala two years ago. Music Therapist Jenny Solar says of Mark, “He really loves music and singing. For whatever reason, having a microphone is important to him. I think he really enjoys opportunities to be social.”

Mark’s sister explains that one of the nice things about LBSA for Mark is the stability. “He’s very shy. The staff goes out of their way to ensure that he does the things he wants to do.” Given Mark’s quiet disposition you might think he sits back and has difficulty keeping busy.

In addition to his choir and music engagements, Mark attends a day program half time and spends half time working at the cafeteria at Carleton College. He’s worked at the college for years. Mark also makes weekly trips to the library and senior center and loves trips to the zoo. In addition to music, Mark is artistic and has participated in LBSA’s arts programming for many years. He loves reading and receiving cards and letters and loves to write back.

Interacting with others is important to Mark, and you’ll sometimes see him dancing with others at the Halloween party, Summer Fun Day or one of the other LBSA events. Mark also gets an opportunity to socialize through his participation in the College Buddies program at LBSA. Mark likes to go bicycling with his college buddy, Daniel. Grace says, “Mark loves it when Daniel comes over. I think it is a cool thing. They have developed a really great relationship. When Daniel comes, Mark lights up.”

In Mark’s 40+ years at LBSA, he is proof that you don’t have to be the center of attention to become a valued member of a community. So, next time you meet someone shy or quiet like Mark, make a point to be friendly and get to know them.