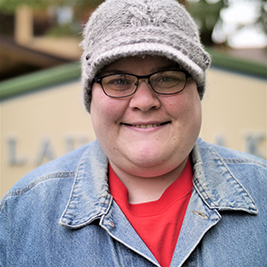 Izzy never thought she would live to age 25.

After surviving years of abuse, she has become a role model in survival.

“In spite of all the obstacles, she’s persevered,” says LBSA Executive Director Sandi Gerdes. She goes on to describe what is amazing about Izzy. “The progress she’s made. The determination to move forward. She’s a kind being when life has not been kind to her.”

The effects of abuse have required Izzy to start from square one in terms of putting her life back together. This rebuilding began back in 2009 when she was placed in foster care. Having a more stable living environment allowed her to start working on specific goals she set for herself. Her list of accomplishments is a resume in regaining independence. In 2009, she became her own conservator. In 2011, she regained her own legal guardianship. In 2013, she received her GED. In 2014, she began working at Target. In 2016, she moved into her apartment.

So how do you continue to move forward given the fact that you’ve faced so many obstacles early in life? “My bullheadedness.” Izzy says emphatically. “Never giving up.”

At the same time, she acknowledges that every day is not always easy. There are times when she’s feeling depressed, and Izzy says that taking things “one day at a time” helps her get through those challenging days. In addition to Izzy’s never-give-up attitude, she credits many of the LBSA staff who have helped her along the way. Izzy recalls a specific example when she was working on her GED. “Staff pushed me. Especially Kathy (Program Director Kathy Davidson). She pushed me when I wanted to give up. She made me flash cards to help me study.” She describes Holly Ciffra (Director of In-Home Services) as being like a sister. “They are caring.  They don’t give up on you. They don’t judge.” Izzy adds, in describing the staff and environment at LBSA. “They treat you like a human instead of a job.”

Even though Izzy is now more settled, she hasn’t slowed down. Izzy works at Target over 20 hours a week. You will also see her working at the front desk at LBSA once or twice a week. Izzy continues to receive support by participating in a day program and has weekly one-on-one staff time with Holly.

She doesn’t have a lot of spare time, but when she does, Izzy enjoys listening to music, studying history, reading, and spending time with her boyfriend and his family. She has also started writing a book about her life.

Izzy is now 34. When asked about future goals, Izzy said there is no rush, but she plans to get married in a couple of years. She adds, she’s always had an interest in “teaching people with disabilities.”

There is little doubt Izzy will accomplish whatever it is she would like to achieve.