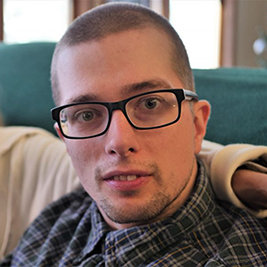 With a prompt, Creegan reaches out and extends his hand. “Hi!” he says with a smile and firm handshake.

Creegan is curious, helpful and very active. He loves playing basketball, walking, listening to music, running, swimming and riding bike. He’s also a very sociable guy. When you meet Creegan today, you would never know that he wasn’t always able to feel at ease in social situations. Creegan used to be on the perimeter of most groups and would often plug his ears. It was heartbreaking for Creegan’s parents. According to Creegan’s mom, “seeing your child like that” has been the most difficult thing about raising Creegan. “Feeling isolated and not seeing him be included is really hard.”

Creegan was diagnosed with Autism at age three. Shortly after that, Creegan’s parents learned about Applied Behavior Analysis (ABA) therapy through their local school district. ABA is the process of systematically applying interventions based upon the principles of learning theory to improve socially significant behaviors. During his childhood, Creegan was involved in five to seven hours per day of ABA therapy. For parents, this type of schedule can be exhausting. Creegan’s mom would often go to her full-time job with an hour and a half of sleep during the early years.

For some individuals with Autism, entering basic community settings can pose a challenge. According to Creegan’s mom, it took a lot of effort to help him acclimate to being out in the community. “We couldn’t even go into the grocery store at all without Creegan having some sort of meltdown.” In order to assist Creegan, over time, his mom would slowly help Creegan get more familiar with the grocery store. First, she would introduce him to the store manager. Then she would introduce him to some of the other staff until he became more comfortable with that situation. “It’s scary at first because you get a lot of looks and people staring.” It’s why public education about individuals with special needs is so important for success in the community.

The time and effort invested has paid off for Creegan.  “I’m so glad we did it.” Creegan’s mom adds enthusiastically. “We got him to read, write and talk.”  His mom humbly downplays her involvement, crediting her son’s success to a great support system including family, friends, school districts and various social service programs along the way. She adds that most of the credit should go to Creegan. “He has worked so hard over the years.”

Creegan is now 26 and ready to start the next chapter of his life at LBSA. Creegan moved into his cottage on the Oak Street campus in October. Creegan’s mom shares that the transition to LBSA has been harder on her than it has on Creegan. Even though it’s been difficult to let go, she is excited about the future and is looking forward to more opportunities for her son. Creegan has a YMCA membership, goes on community outings and has been active in working with LBSA’s art specialist. He is also hoping to obtain a job through Epic Enterprise in the near future.

His mom says she likes knowing that Creegan will be around peers and will know he’s not alone.

She adds, “I’m just so proud of him. It’s like he grew up overnight.”